Free Courses » Economics » What is Demand? Different Types of Demand and Demand Function

The demand function explains the relationship between the demand for a commodity and its determinants.

Out of all the factors, price is the most important factor. Hence,

This shows that the demand function for a commodity is a decreasing function of its price.

It is the demand of an individual consumer for a given product at different prices. It is a microeconomics concept and a component of market demand.

It refers to the demand of all consumers for a given product at different prices. It is the sum of demand of all the individual in the economy. It is a macroeconomics concept and denotes the size of the market for a particular product.

Example: The quantity of market demand for mobile phones at INR 5,000 stands at 100 million pieces.

When two products are demanded together, that is, they complement each other, it is referred to as joint demand or complementary demand. In the case of joint demand, when the price of one product falls, the demand for both the products will rise and vice-versa.

This involves two products competing among themselves to satisfy a specific want of the consumer. Competitive demand involves substitutes.

Example: Pepsi and Coca Cola have competitive demand. When the price of Pepsi rises, the demand for Coca Cola may increase.

It refers to the demand for a product that has multiple uses.

When a product is demanded for final consumption, it is said to have direct demand. The demand for consumer goods is direct demand.

The Law of Demand states that When the price of a good is increased (such that all the variables are held constant), the quantity of demand for that good will decrease. Thus, people will buy more at lower prices and less at higher prices. The law of demand explains the relationship between the price of and the demand for a commodity.

The law of demand can be illustrated using a demand schedule and demand curve.

A demand schedule shows the quantity of commodity demanded at different prices. It is of two types: 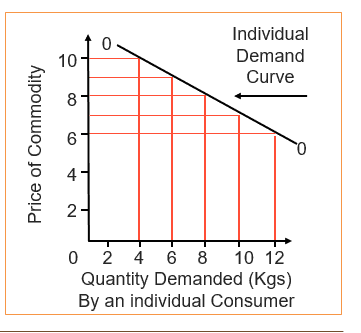 It shows the quantity of a commodity that an individual consumer is willing to buy at different prices.

For example, When the price of mange is 10, the quantity demanded is 4.

Subsequently, when the price falls to 9, the demand increases to 6.

Similarly, as the price keeps falling, the quantity continues to increase.

It shows the quantity of commodity that can be sold in a market at different prices.
For example, 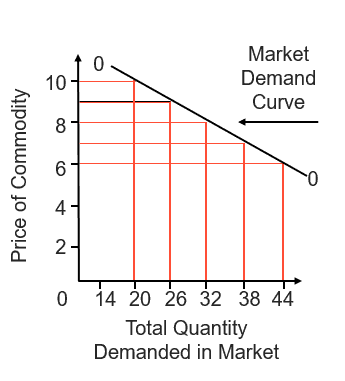 It shows the quantity of commodity that can be sold in a market at different prices.

For example: When market price of mango is Rs. 10 and market demand is 20 kg, mangoes demanded by Mr X, Y and Z are 4,6, and 10 mangoes respectively.

Subsequently, when the price falls to Rs. 9, the market demand increases to 26 kg and share of mangoes demanded by Mr X, Y and Z also increase to 6, 8 and 12 mangoes respectively. This trend continues as the price falls further up to Rs. 6.

See also  Liquidity Preference and its effect on Rate of Interest

Assumptions of the Law of Demand

Other things being equal’ is an important assumption of the law of demand. It refers to the condition under which the law will hold true.

The following are the assumptions of the law of demand: 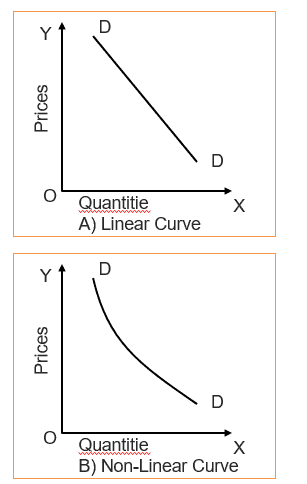 The normal general demand curve slopes downwards due to the following reasons.

When the price of a commodity decreases, it becomes relatively cheaper than its substitutes. Therefore, the quantity of the commodity demanded increases owing to costlier substitutes.

When the price of a commodity decreases, the consumer can buy more quantity of the commodity at his level of income; this implies that his real income or purchasing power increases.

When the price of a commodity is relatively high, only a few consumers can afford to buy it. However, when its price falls, more number of consumers tend to buy it, because some consumers who previously could not afford the commodity may now be able to buy it.

Exceptions to the Law of Demand

For commodities that are necessities such as salt, food grains and medicines, demand is not affected by a change in their prices because consumers can neither increase nor decrease their consumption.

The demand for prestigious goods such as diamonds increases as their prices increase, because such commodities are bought by the wealthy to whom the price does not matter.

Certain products are perceived to be of value and purchased by consumers owing to their high prices, such as cosmetics and decorative pieces. Thus, an increase in the price of such goods does not impact demand.

5. Expectation of Future Changes in Prices:

During emergencies such as war and famine, the prices of almost all commodities increase and their demand also increases. 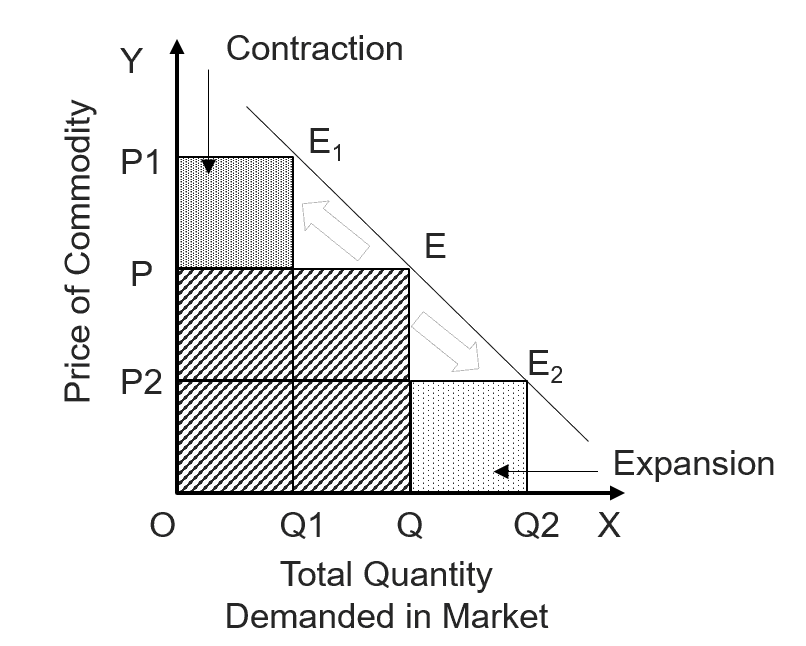 Demand may change due to the following factors: 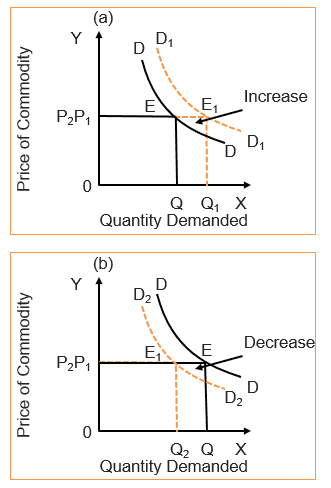 2. Increase or Decrease in Demand: