An oligopoly is similar to a monopoly, with the difference that instead of one firm, two or more firms dominate the market. In an oligopolistic market, a small number of firms enjoy a large majority of the market.

There is no upper limit to the number of firms in an oligopoly, but the number must be sufficiently low such that the actions of one firm can significantly impact and influence the other firms.

The kinked demand curve model is a good example of non-collusive oligopoly.

Collusion is said to take place when firms work in tandem to reduce market uncertainty.

Firms may get involved in price fixing or cartelisation.

Moving on to Price Rigidity or Kinky Demand Curve: The dependency and uncertainty aspects of oligopoly lead to the demand curve being indeterminate.

Duopoly is an extremely limited case of oligopoly, where there are only two firms.

The kinky demand curve can be obtained by merging the TD part of firm A and the TDb part of firm B. In the second figure, quantity OM is sold at price OP. Price OP is expected to remain rigid or not undergo any further change.

If an oligopoly cuts price to below OP to increase product sales, rivals will react quickly to reduce the prices of their products to retain their respective market shares. The gain made by each oligopoly will be marginal, and this weak demand response will lower the elasticity of the TDb part of the demand curve.

If an oligopoly raises price to a level higher than OP, customers will move to other oligopolies. A substantial decrease in demand owing to any increase in price above OP increases the elasticity of the DT part of the demand curve.

Equilibrium of a Firm 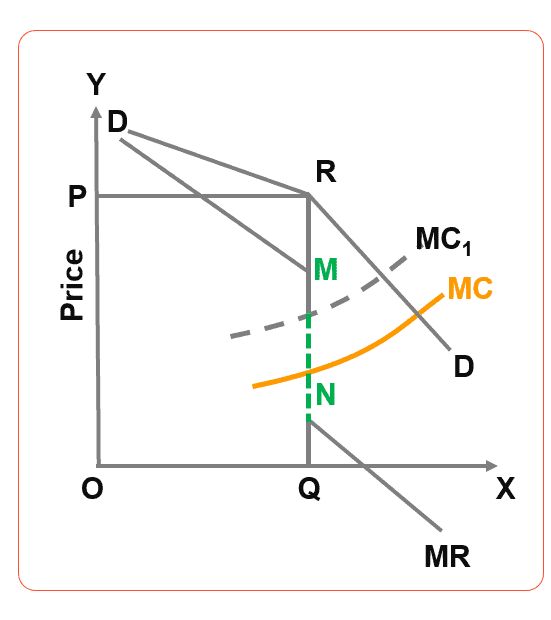 Demand curve is kinked, with a kink at R. The corresponding MR has a discontinuous portion MN. This discontinuity is caused by the kink, which depends on the relative elasticities of the two segments of the curve.

The MC curve passes through the MN (discontinuous) part of MR, and the equilibrium output is the point of intersection of MC and MR. The output corresponding to this point is OQ. The corresponding point on the demand curve OP governs price.

Any decrease or increase in the MC curve over the discontinuous part of the MR curve does not alter the quantity produced and the price. Thus, the determined price remains rigid at the kink on the demand curve.

To avoid price wars, as well as to recognise the significance of dependency and the uncertainty of their situation, the firms in an oligopoly may behave collusively by forming a cartel. Cartels can be overt or explicit for example, OPEC or implicit.

In Market-sharing cartel, Each member gets exclusive rights to operate in a specific geographic area. Whereas in Centralised cartel, The cartel decides product price, allocates output among members and sets the rules for profit sharing.

As agreements formed in secrecy, cartelisation is among the most detrimental types of anti-competitive business practices.

There may be a common sales agency with exclusive rights to sell the commodity of the firms that are party to an agreement.

In a perfect cartel, firms surrender their rights to govern output and price to a central administrative agency, which determines how profits are distributed among the members as well.

By contrast, in a loose cartel, decisions pertaining to the sharing of output and profit, as well as profit distribution, may be made differently. Two such important methods are market sharing by non–price competition and quotas.

Oligopolists may resort to non-price competition or covert cheating.

Such competition usually manifests as secret discounts, additional facilities or other secret benefits to retailers or consumers.

All firms in an oligopoly agree on the quota of output and price.

In this case, the output quota of each firm in the cartel would be contingent on its past records and negotiation skills.

Price leadership is said to occur when the market leader in a certain sector sets the prices of goods or services produced by the said sector.

Types of price leadership are:

In an oligopolistic market, one of the firms may have the advantage of producing a large proportion of the total output. Thus, the dominant firm can assert its power and influence others in setting total output and market price based on market demand.

An oligopoly firm that enjoys low production cost is favourably poised to become an industry leader. It decides the price that other firms with higher production costs are required to accept, and it is left to those firms to find ways of reducing their production costs.

A large, experienced and respected company serves as a leader based on its qualities. A barometric firm is expected to understand the market and set prices based on demand, cost of production, competition and so on.

A large or dominant firm establishes leadership by means of aggressive price policies and compels competing firms to accept said policies.  If the followers fail to comply, the aggressive firm imposes its leadership by threatening to push the non-compliant firms out of the market.