A production function is an equation, table or graph that shows the maximum volume of output available from a given set of inputs or the minimum set of inputs necessary to produce a given level of output. Suppose commodity X is produced by two methods using labour and capital.

Here, both methods A and C are technically efficient and are included in the production function. The selection of methods is then contingent on the prices of factors.

where Q is the Quantity produced, N are the Natural resources, L is the Labour, K is Capital, E is the Entrepreneur and T is the Technology used. For simplicity, only labour and capital are considered independent variables in a production function. Then function can then be expressed as Q = f (L, K).

Computing the least-cost factor for a given output or the maximum output combination for given cost.

Deciding the value of using a variable factor in a production process.

An isoquant curve denotes various production combinations that a firm can employ to produce the same level of output. 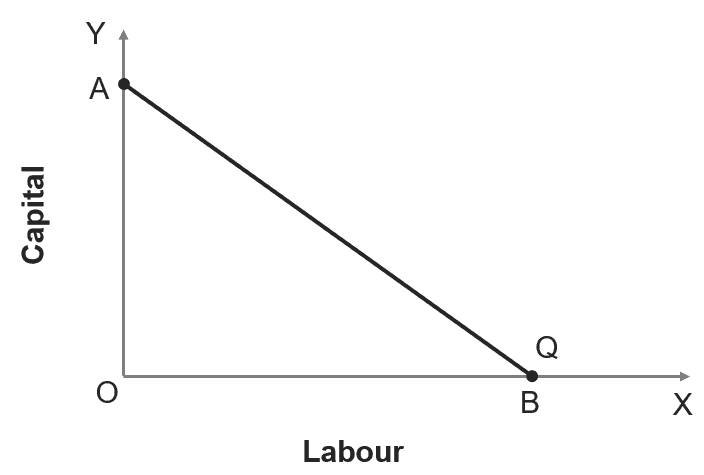 This is unrealistic given that capital and labour are not perfect substitutes for each other. 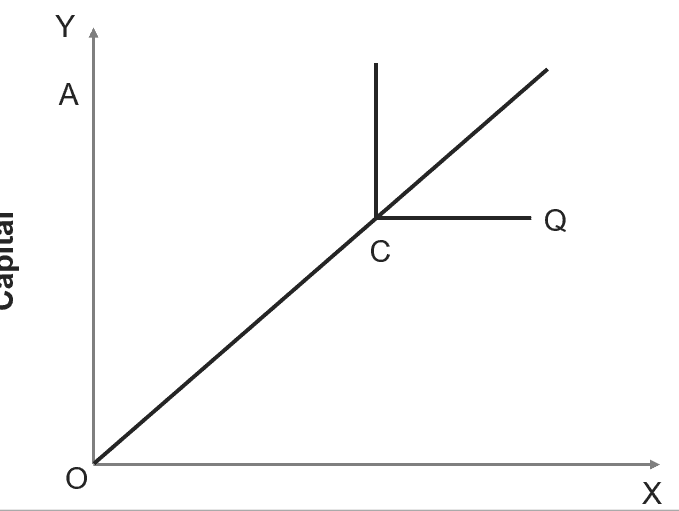 This assumes zero substitutability of production factors, that is, only one method can be used to produce a given commodity.

The output can be raised only by raising both labour and capital inputs by the same proportion as those corresponding to point C. Also known as input–output isoquant or Leontief curve 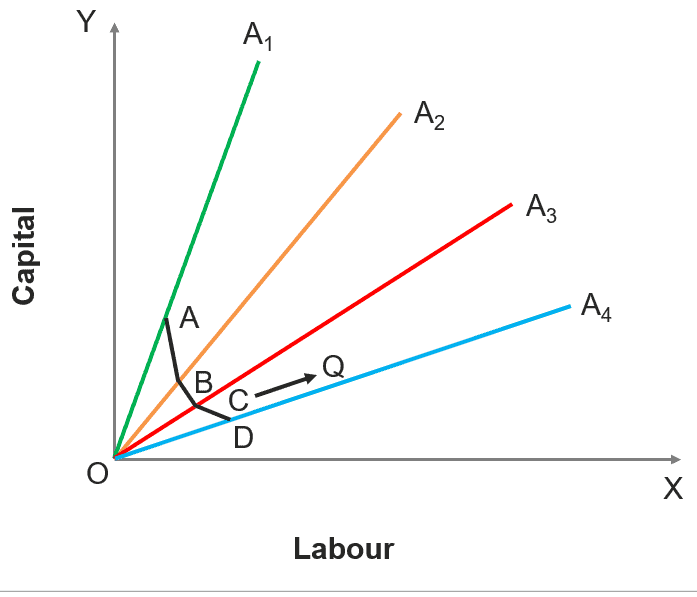 This curve assumes only limited substitutability of capital and labour. Only a few processes can be employed to produce a given commodity. A1, A2, A3 and A4 show the process, and Q is the kinked isoquant. Factors are substitutable only at the kinks, that is, points A, B, C and D.

This is a more realistic type of isoquant given that engineers, managers and production executives consider production processes as being discrete as opposed to continuous. 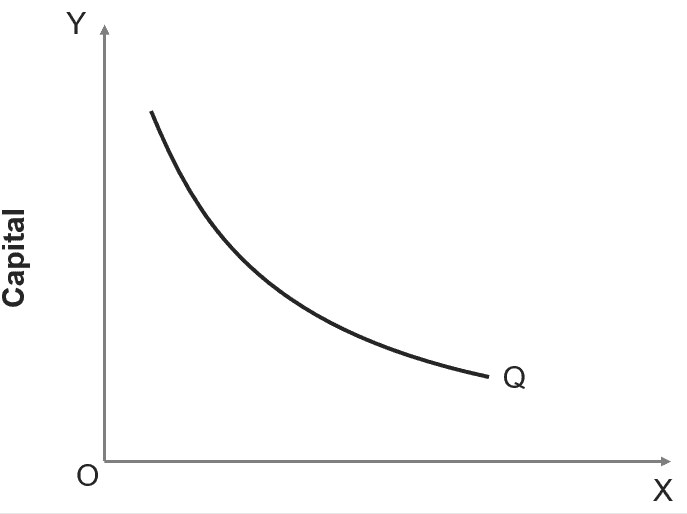 This curve assumes continuous substitutability of capital and labour over a certain range, and beyond this range, the factors cannot act as substitutes or each other.

It is an approximation of the more realistic form of a kinked isoquant because as the number of processes approaches infinity, the isoquant becomes a smooth curve. 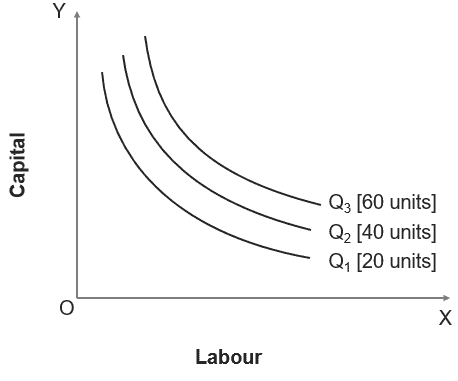 Given that each isoquant stands for a specific output level, it is possible to determine the extent by which the output is greater or lesser between two different isoquants.

The figure shows that the outputs of isoquants Q1, Q2 and Q3, respectively, are 20 units, 40 units and 60 units. An isoquant map allows one to compare the outputs of various isoquants.

In theory, an isoquant map comprises an infinite number of isoquants because the response of output to infinite changes in factors is assumed continuous.

1. Isoquant slopes downward to the right 2. Isoquants do not intersect 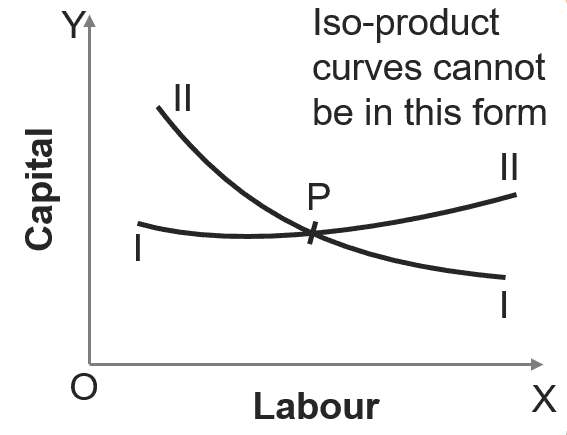 All isoquant curves represent different production levels; Hence, the intersection of isoquants at a certain point is absurd, as can be inferred from the graph.

3. Isoquants are convex to the origin 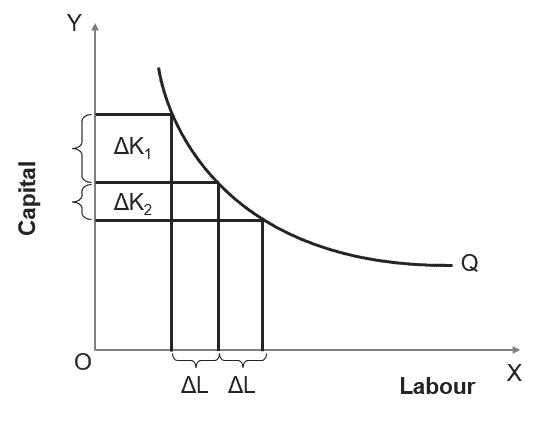 The slope of an isoquant is negative at any point, and it is a measure of the marginal rate of technical substitution between labour and capital.

The slope can be expressed as:   delta K divided by delta L = MRTSLK = MPL/MPK

The convexity of an isoquant implies that as we move down the curve, a lower amount of capital is spent per additional unit of labour to maintain a constant output level. 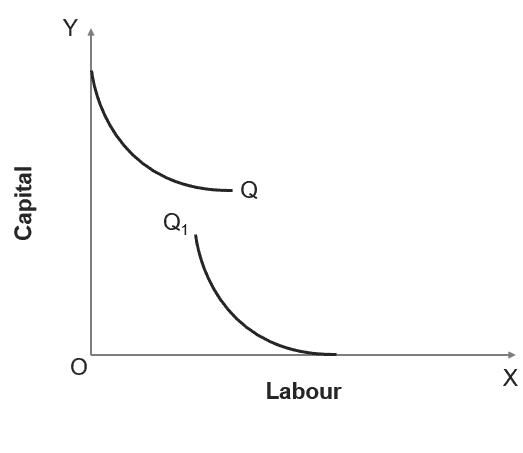 If an isoquant touches any axis, it means that the output in question can be generated by employing only one factor. This scenario is unrealistic because any output cannot be generated by labour or capital alone. 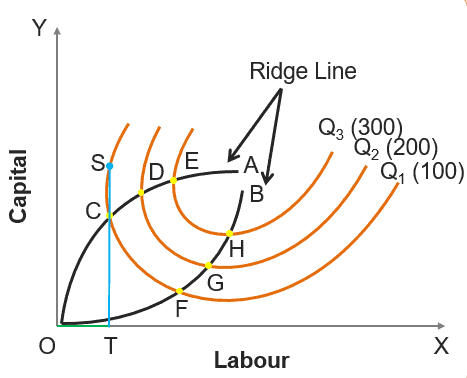 Curves Q1, Q2 and Q3 are oval-shaped isoquants, while curves OA and OB are ridge lines.

Points C, D, E, F, G, and H between the ridge lines are economically feasible units of capital and labour that can be used to produce 100,200 and 300 output units.

Also known as optimal combination of inputs or producer’s equilibrium, a firm can maximise its profit by either maximising the output level for a given cost or by minimising the cost of achieving a given output level.

The choice of a specific method from a set of technically efficient methods is an economic one, and it depends on the prices of production factors at any given time.

There are two ways of determining the least-cost combination of factors:

Calculate the total cost of each factor combination and choose the combination with the least cost.

The cost of each factor combination is calculated by multiplying the price of each factor by its quantity and summing up the products for all inputs. 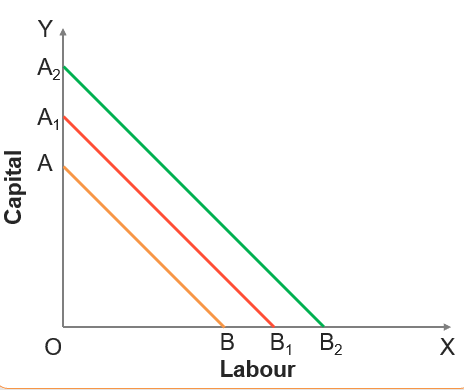 When the amount of money spent on factors increases, the iso-cost line shifts towards the right, because for the given factor prices, a firm could buy greater quantities of the factors. 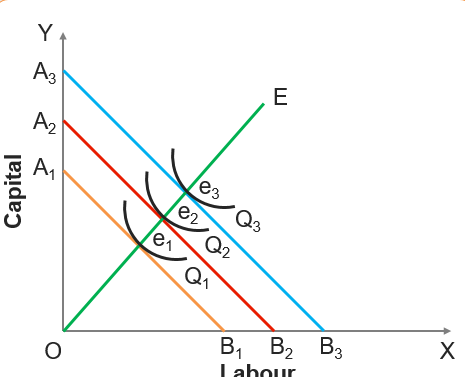 It is the locus of the points of tangency between the isoquants and the iso-cost lines. It shows how a firm, given factor prices, will charge the amount of two factors when it expands its production scale. The iso-cost lines A1B1, A2B2 and A3B3 are drawn parallel to each other because it is assumed that the relative factor prices are constant.

If a firm wishes to produce the level of output denoted by isoquant Q1, it will choose the least-cost factor combination e1for which isoquant Q1 is tangential to the iso-cost line A1B1

In a fixed-proportion production function, the technology requires a fixed combination of inputs to generate a desired level of output, and it is denoted by right-angled isoquants.

Let us suppose that the output at point A1 is one unit. The isoquant Q1 passing through A1 shows that one output unit is produced using 2 capital units and 3 labour units, that is, the capital-labour ratio is 2:3. 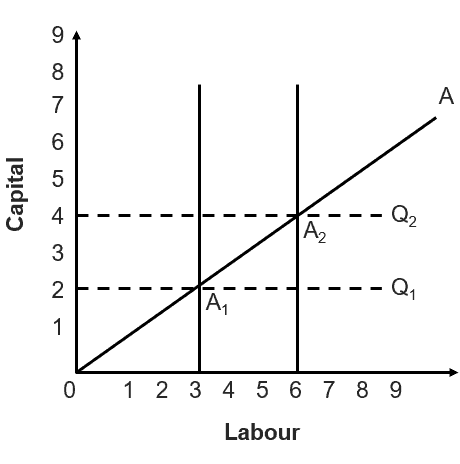 With two capital units, any increase in labour beyond three units will lead to increased output.

Output can be doubled by doubling the quantity of inputs, that is, two output units can be generated using four units of capital and six units of labour. Therefore, isoquant Q2 passes through point A2.

Ray OA represents a production process, and the slope of this ray indicates the capital–labour ratio maintained for any input level. 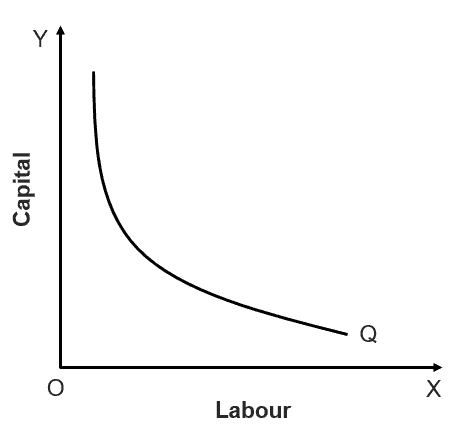 In this case, several alternative combinations of production factors can be employed to produce a given output level. It is assumed that there are infinite ways in which the factors can be combined.

The common output level obtained from capital-labour combinations is given by isoquant Q. This isoquant is continuous, smooth and convex to the origin.

The long period is sufficiently long so that adjustments to all factors including capital are possible.

According to this function, the output can be increased in the short-run by altering variable factors, with the fixed factors being constant.

Short-run production, where output can be increased by increasing one variable factor and leaving the other factors fixed, can be explained using the Law of Variable Proportions.

It is also called as the law of diminishing marginal returns. This law specifies the behaviour of products in the short run, where output is increased by increasing the units of variable factors and keeping the other factors fixed.

Lets look at the Assumptions of this law

A few production factors or inputs remain unchanged, for instance, capital in industry and land in agriculture.

Inputs or production factors whose supply can be increased in the short run.

3. Homogeneity of the variable factor

All units of variable factors have the same efficiency.

Technology is given and constant. Labour is the variable factor, and all other factors are fixed. 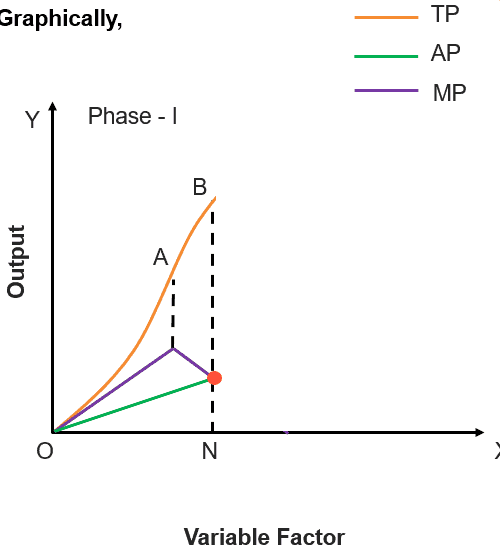 In the first phase, TP rises. The increase in TP can be divided into two stages.

Up to point A – TP grows at a rising rate and MP increases as well. The TP curve is convex to the X-axis until point A.

TP grows at a diminishing rate and MP decreases. Starting from Point A, the TP curve becomes concave to the X-axis. Throughout the first phase, AP increases. Although MP decreases in the second stage, it remains higher than AP.

Therefore, phase 1 is the stage of growing returns. At the end of phase1, AP and MP are equal. 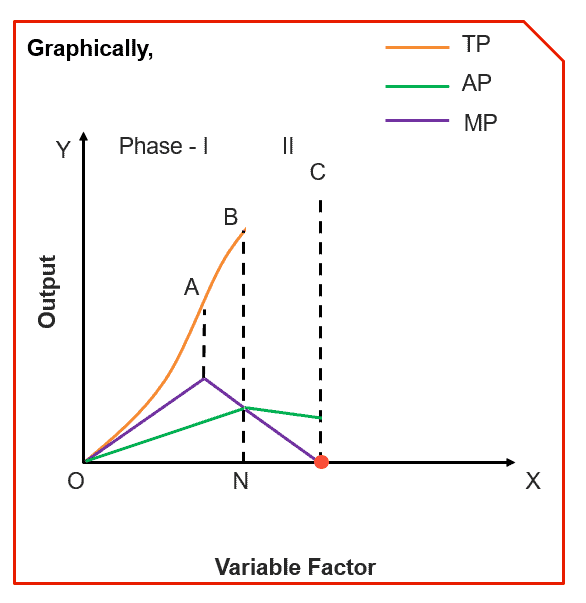 TP continues to grow at a diminishing rate until it peaks at point C, while MP decreases. ere MP is less than AP, and although AP is higher than MP, it decreases throughout the second phase.

The second phase ends when TP peaks and remains constant, and MP becomes zero. It is the phase of diminishing marginal returns because both MP and AP decrease throughout this stage. 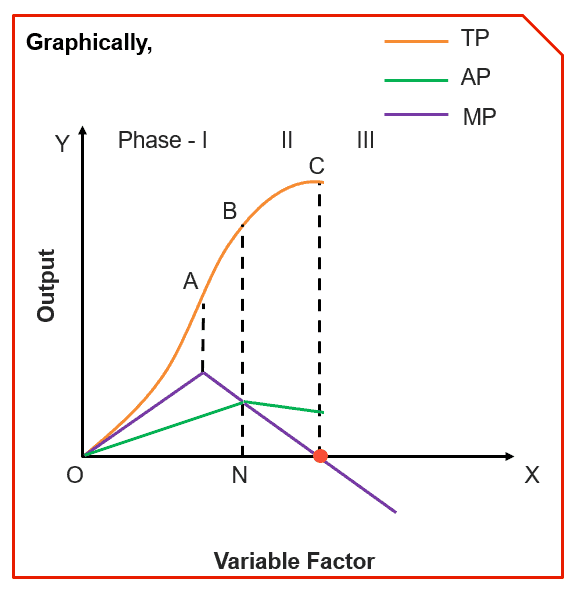 A decline in TP, which results in negative MP. The MP curve falls below the X-axis. Although AP is positive, it continues to decrease in the third stage.

A producer should decide the extent to which production is to be carried out and in which of the three phases should the producer function. Functioning in the third phase is irrational because the marginal returns in that phase are negative.

A producer will not cease production in the first phase of increasing returns. This leaves only phase 2, where the producer produces but does not extend production until the last point of phase 2 because at this point, MP is zero.

Therefore, a rational producer will operate in that part of the second phase where MP is positive.

Law of Returns to Scale 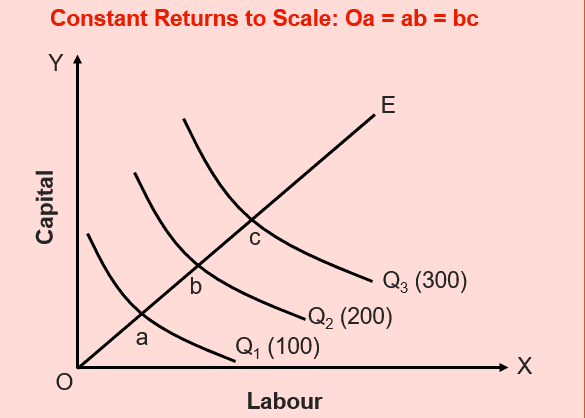 Also called the linear homogeneous production function, if output increases proportionally with an increase in input, returns to scale are considered constant.

Line OE is the scale line that indicates an increase in scale. The distance between successive isoquants is the same, that is,

This implies if both labour and capital are increased by a given proportion, output expands by the same proportion, as indicated by the numbers 100,200 and 300 against the isoquants. 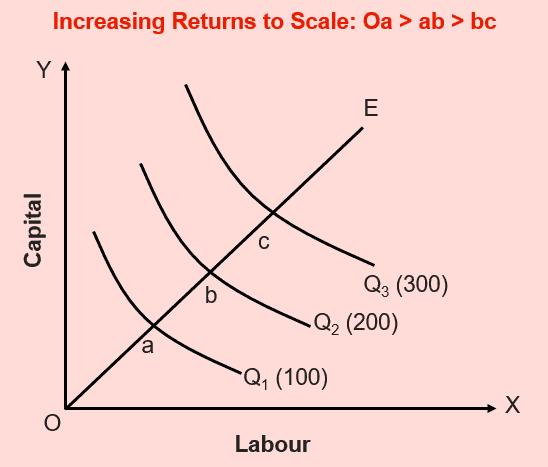 When the returns to scale are increasing, the distance between successive isoquants decreases, that is, Oa > ab > bc.

This implies equal increases in output, that is, 100 units for each isoquant, can be achieved with decreasing increments of input. In other words, by doubling inputs, the output can be more than doubled. Increasing returns to scale can be attributed to the indivisibility of a few factors. 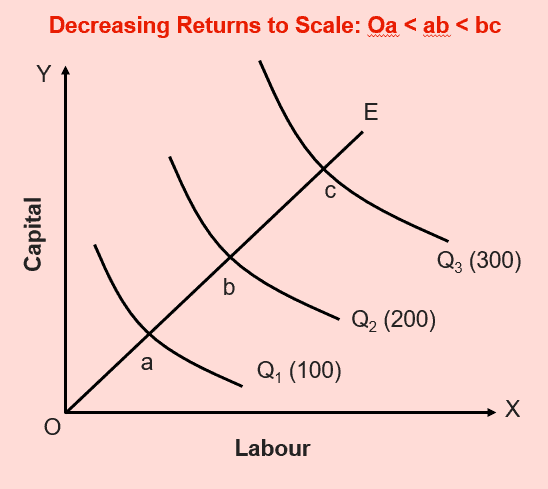 This implies equal increments, that is, 100 units in output are obtained by further increases in inputs. Returns to scale can be measured in terms of the co-efficient of output elasticity (QE)

If QE =1, returns to scale are constant

If QE is more than 1, returns to scale are increasing

If QE is less than 1, returns to scale are decreasing.